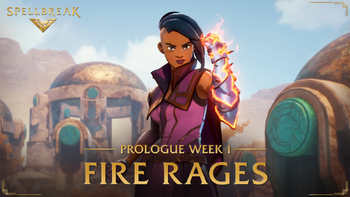 Chapters combine quests with an evolving story, along with a series of rewards, such as exclusive Cosmetics or

Chapter rewards unlock by earning Reputation, which is done by either completing matches or Honor Quests.

As the story progresses and the lore expands each week, new Honor Quests will be made available.

Chapters (with the exception of Prologue) will last 12 weeks, and will be interwoven with the more traditional patches.

Starting from Chapter 1, chapters will feature twice as many quests, levels and rewards, as well as a Chapter Pass.

Chapter Passes grant access to three additional quests, rewards and a boost to reputation earned (retroactively). They may be purchased for

Avira Emberdane: The Spellstorm that rages in the Hollow Lands has made refugees of far too many. Halcyon, Banehelm, Dustpool, Bogmore, four kingdoms lost to us. And while Longwatch has taken in many, its resources grow thin. If we're to return our homelands to their former glory, we must stop the Spellstorm.

And so we turn to the aid of Breakers such as yourself. Experts in magic who can navigate the dangers of the Hollow Lands, who can hold their own against enemy Breakers and Vowguard soldiers. But first, you must master the many gauntlets at your disposal. I can think of no better place to start than the versatile Fire Gauntlet.

What element is so beloved, so feared, as the power o fire? We could not live without its warmth and light. Yet how many lives have been taken by its callous flames? Burned away to ash. One must master the flame or be consumed by it.

The path of the Pyromancer is a tricky one. Fire is not easily tamed. But those who learn to control this element, to bend with its flame rather than against it, are the masters of untold power. Let's see how you fare against the flames.

Tempests can be as gentle as the breeze or as fierce as a summer squall. Just as the wind is able to upturn roots and destroy homes, so too can the masters of this element. Respect the wind and you’ll gain the strength of the storm.

Avira Emberdane: Elixir of assassins. Drink of the damned. Toxins, bitter and cruel. It has slain kings and toppled empires. Whether coated on the edge of a blade or given gaseous form, it is just as deadly. This poisoned brew that kills without discrimination.

Toxicologists have a sordid reputation, but we'd be lost without them. Not every enemy can be defeated by strength alone. And though the use of life-sapping toxins may seem underhanded, the end goal of victory certainly justifies such means.

Avira Emberdane: Our walls are built upon the stones of the past. They keep us safe, protecting us from bandits and invaders, from storms and frost. But they also lock us in. We are imprisoned within them, unable to break free. For good or ill, there are few who can defy stone’s might.

You’ll be hard pressed to find a more reliable ally than a Stoneshaper. It takes a steady hand to conquer stone, and a strength of will besides. And there are few who can stand against a Stoneshaper's might once they decide to strike. Do you have what it takes to join their ranks?

Avira Emberdane: For the people of the Highlands, the year is but preparation for winter’s might. The icy winds that cut through your flesh like the edge of a knife. The freezing air that saps the life from your bones. We must prepare for winter, for to ignore it means death.

Frostborn mages can be as ruthless and deadly as winter’s bite. For the truly skilled, it only takes one well placed shot for their enemies to fall. But before you can master this element, you must first learn to take careful aim.

Avira Emberdane: The thunderstorms of the Highlands are well known for their ferocity. Heavy rains that linger for days. Clashing thunder that strikes fear into our hearts. Lightning which pierces the earth, deadlier than an assassin’s blade.

Lightning can strike twice, if you have the discipline to control it. Conduits wield the power to blast through their enemies with streams of electricity, shocking them into submission. But such a chaotic element takes keen instincts to control it.