From Spellbreak Wiki
(Redirected from Combat)
Jump to: navigation, search 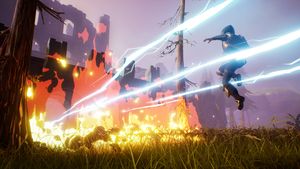 In Spellbreak you play as a Breaker, a mage that is tapping into the power of forbidden magic hidden within ancient Gauntlets of various elements.

Spellbreak's combat centers around different Classes for each mage, that allows them to master a certain element.

There are many synergies between the elements to discover, allowing you to combine and melt them together in unique ways.

Starting from nothing, players drop into the Hollow Lands to loot, increase in power, and defeat enemy players in order to become the ultimate battlemage.

Run, jump, levitate, dash, fly and teleport around your opponents in order to decimate them with powerful Spells & Sorceries obtained from Gauntlets.

Chests throughout the Hollow Lands.

As you traverse the land a trail will be left behind you when levitating, allowing other players to more easily spot your position.

You will also find giant rifts in the ground caused by The Fracture, that will immediately exile any player unfortunate enough to fall in. Ending the match for them.

Your goal will be to escape from the Spellstorm and either outlasting or exiling your opponents through combat until you're the last one standing.

As with most other battle royale games, one of the core game mechanics is an ever-shrinking safe zone that is marked by a circle on the map.

Players must aim to stay inside the safe zone at all costs in order to survive.

The safe zone will spawn 20 seconds after match start, and can appear anywhere on the Hollow Lands map.

Outside the safe zone is a furious Spellstorm that deals 1 damage every 2 seconds directly to a player's health, bypassing armor.

The damage doubles in power each time the Storm fully encloses a new safe zone, and it will continue to shrink until the entire map is covered.

The player levels up each time they enter a new safe zone, unlocking the next Skill for their chosen Class.

Mana Vaults will spawn inside the safe zone each time the Storm fully encloses it.

The Lobby, also known as the Stormeave Plateau, is where every Breaker starts out after before the match begins.

Here you can get familiar with your squad, test out all the Gauntlets and Runes, and plan out a strategy in line with your Class before the match.

Once a minimum of 6 players are in the lobby, the match countdown will start.

The countdown will vary based on game mode, queue and player count, see the table below:

When the match starts, players will have 20 seconds to choose a portal to drop from into the Hollow Lands.

Players will drop together with their squad by default, and can move their squad's spawn portal by right clicking.

Spellbreak currently has 2 different Game Modes. All of them take place on the Hollow Lands map, but with variations on the gameplay experience.

In this game mode, the player can queue as either solo, duo or squad (three players).

If you queue as duo or squad, you also have a "fill" option, which allows others entering the lobby to fill up empty slots in your party.

In solo queue, the player will immediately be exiled upon death, ending the match and dropping all their items and equipment in the process.

In duo & squad queues, the player disrupts into a wisp upon death and starts fading away over 90 seconds.

This allows them to be

revived by a teammate after a 5 second channel, recovering 40 health.

Should they fail to be revived in time, or if their remainding squad is disrupted as well, they will be exiled.

They can also be

exiled prematurely by an opponent following a 5 second channel. The channel will be interrupted upon any damage taken if the player is exiling, but not if reviving.

Each game lobby can house a maximum of 42 players.

In Clash two teams of up to 9 players are pitted against each other, in a race to be the first to reach the required score and win the game.

Each exile will add one point to the total score of the opposing team.

Upon being exiled, the player will drop all their equipment as usual, but the match will not end for them.

Instead, after 8 seconds they will respawn and drop from a random portal within the current safe zone.

They will spawn with full health and armor, duplicate equipment and 2

small armor shards in their inventory.

However, one should expect to be exiled often as there is no

consumbles to be found anywhere on the map.

In addition, equipment of Common rarity is removed from the loot tables of

Finally, the starting safe zone is much smaller in Clash as opposed to Classic, and the Spellstorm closes in faster.

The game supports a wide variety of controllers.

Xbox 360 & Xbox One controllers work right out of the box when plugged in.