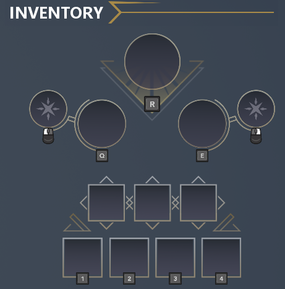 Players have access to a variety of equipment in Spellbreak to modify and enable their Spells, Sorceries and Rune abilities.

Equipment generally augments a player's offense, defense, and mobility via Amulets, Belts, and Boots respectively. A player can only equip one of each type of equipment.

Players also have 4 additional inventory slots available to carry unequipped equipment and Gauntlets in. Consumables can stack up to 2 in one inventory slot.

Players can ping equipment to alert their teammates of valuable loot they have found.

At the start of the game, players will have a baseline max health value of 100, a max mana value of 50, and a max armor value of 20.

These max values can be increased through a variety of equipment listed below, and also through certain Class Skills.

Mana is used to cast Spells and also to levitate. Levitating costs 10% max mana per 0.1 second, meaning a full mana bar will allow a player to levitate for 1 second regardless of how much max mana they have.

Once their mana is depleted they will have to recharge it again over 1 second. 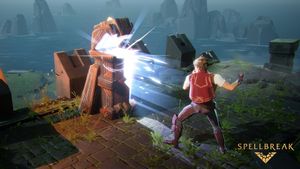 Equipment can be found all across the Hollow Lands. However, only equipment of at least Rare rarity has unique abilities attached to them, with the exception of runes.

The higher rarity equipment can be found in chests, which are primarily stored in castles and villages.

Equipment of Legendary rarity however, can only be found in

Mana Vaults that spawn randomly across the map at match start.

Additional vaults will spawn inside a safe zone each time the Spellstorm fully encloses a new safe zone.

Mana Vault's assembly takes 20 seconds, and is audible to nearby players. In the solo game mode it can contain a maximum of three items in total rather than four.

Runes grant access to a third activated ability which provides non-damaging utility, primarily mobility. They have 1 charge by default, and can only recharge fully once the player is grounded. 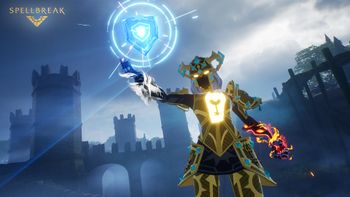 Consumables grants the user a regenerative buff for 10 seconds after a short channel.
The player can move at reduced speed, crouch and loot while channeling. Doesn't break invisibility.
Casting any Spells, Sorceries, activating Runes, jumping or taking direct damage from another player will cancel the channel.