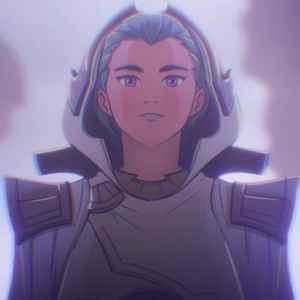 The primary source for Spellbreak's Lore comes from Garrick's Journal and the on-going Chapters.

Spellbreak is set in a ravaged fantasy world filled with elemental magic.

You assume the role of a Breaker, a magically gifted outcast who has come to the Hollow Lands to take as much power and loot as you can and get out.

Spellbreak is set in a region once known as the Highlands on the continent of Velnor, but now is known only as the Hollow Lands.

The various fights for power and treasure take place after an apocalyptic event called The Fracture, which took place one year ago.

The Fracture and the Spellstorm that came along with it changed the face of the Highlands forever, making it not just uninhabitable but lethal to its former denizens. Including all animal life, excluding plant life.

During the event, a region known as the Stormeave Plateau broke off from Velnor. Only the fortress-city of Longwatch residing on it remained unscathed, where the majority of human refugees have taken shelter.

Within Longwatch is a Breaker-controlled faction led by Avira Emberdane. The player is first introduced to her in the tutorial, where they learn to travel to the Hollow Lands via portals, also known as Storm Hatches.

Garrick has written some of the important history related to the Highlands and what caused The Fracture in Garrick's Journal.

200 years[1] before this event however, the wardens of each kingdom formed an alliance between them called the Five Hand Alliance.

The five kingdoms of the Highlands* and their respective Hands at the time of the alliance's founding:

The founder and architect of this alliance was Alad Fieldbrand, the first Hand of the People. He was a warden of Fort Halcyon, where the seat of government was formed.

The alliance was designed to prevent any one individual from ruling the Highlands as a tyrant. To achieve this, each Hand was given the responsibility of voting in matters that pertain to the entire region.

In book 4, pg. 80 of Garrick's Journal, it is mentioned that the alliance was formed out of necessity to fight against a rising external threat that would eventually lead to the "Lost War".

Each Hand had their own individual responsibilities surrounding different aspects of the alliance, as can be derived from their titles.

The use of magic was widespread prior to the Vow Mandate, and curiously the alliance never formally recognized the VowKeepers.

Not much is known about the times before the forging of the alliance aside from folktales of endless bloody feuds between the kingdoms.

*(Description for each kingdom needed)

The human race in Spellbreak is broadly divided into three factions:

The Prisma are a separate race[2] from the humans, and while they were once good allies of the denizens of the Highlands, the border between their nations was closed by the Five Hand Alliance.

Before the Fracture, Dustpool Hold was the home of mining operations, and as a result became the center of trade and commerce in the Highlands.

Wealth in the Highlands was measured both in regular gold coins as well as the trade of valuable items such as magic-infused runestones, brilstones, and Vital Stones.

The value of brilstones varies with the quality and the cuts of the gems. The mines of Dustpool were the primary source of brilstones, which are said to be the source of a Gauntlet's power.

Additionally, book 4, pg. 85 of Garrick's Journal alludes to how the Gauntlets may have been crafted by an unknown race of great armorers.

Elemental magic draws from the power of the world itself to manipulate the elements.

Specially crafted Gauntlets inlaid with brilstones allow a user to attune to a specific element and wield it against their foes.

Breakers wield the elemental magic of Gauntlets when they scour the Hollow Lands for riches and artifacts in order to protect themselves from other Breakers.

Amongst humans very little is known about runic magic, save perhaps by Garrick, a handful of VowKeepers, and likely the Shadehand.

The Prisma presumably know a great deal about runic magic, considering their most significant export when trade was still open to the Highlands was runestones.

Runic magic seems to take a couple of major forms:

Garrick has found several examples of runic magic in the vaults of the VowKeepers as well as in the remains of the Hollow Lands.

Some Breakers use runic magic to augment their abilities while in the Hollow Lands and gain an edge over their opponents.

It is even said that some Breakers use runic magic to alter their appearance or taunt their foes.

During the tutorial, Avira informs us that Vital Stones are what keeps Breakers from being killed.

Vital Stones are incredibly powerful magical conduits that Breakers can attune to.

Once a Breaker has attuned to a Vital Stone, if they are ever injured severely enough to be killed, their body disintegrates and reconstitutes at the hidden location of their Vital Stone.

Vital Stones can also be used to extend a Breaker's lifespan far beyond what is normally achievable.

The world of Spellbreak takes place on a planet called Primdal, with one known moon named Sipra. The Highlands, now known as the Hollow Lands, exist on the continent of Velnor.

During The Fracture a region called Stormeave Plateau broke off from the continent. In book 4, pg. 191 of Garrick's Journal, he describes how a specific topological quirk known as The Awning has protected it from the Spellstorm.

The overall geography of the Hollow Lands is still similar to when it was the Highlands, but the destruction caused by the Fracture has left enough changed that old maps are by and large inaccurate.

New, relatively crude maps have been created by Breakers for their own use in navigating the Hollow Lands, but Ferec Snowlash and the Vowkeepers have acquired highly detailed maps through unknown methods.

We've learned through Quincy Poisewax's journal that Fort Halcyon was built and fortified by Stoneshapers.

The architectural style of the Highlands is a hybrid between Nordic and Japanese villages and castles. See Concept Art.

It has yet to be revealed who she is, or what her larger role is in the lore of Spellbreak.