From Spellbreak Wiki
(Redirected from Spells)
Jump to: navigation, search 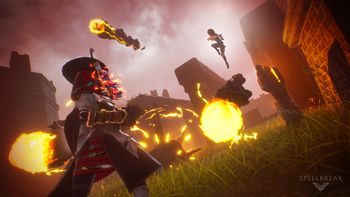 One of the core aspects of combat in Spellbreak is the ability to cast Spells & Sorceries.

By default without any Gauntlet equipped, players only have access to a magic-missile like spell that does 10 damage.

More advanced elemental Spells and Sorceries can be acquired by picking up a Gauntlet to use for both the left and the right hand respectively.

Each Gauntlet is imbued with an element, that allows the player to cast a Spell which uses mana, and a more powerful Sorcery that is free, but has a longer cooldown timer.

Players start the match with a Common Gauntlet in their left hand corresponding to the element of their chosen Class.

There are a number of unique mechanics surrounding each Gauntlet, some of them tied to their respective Classes.

Players cannot pick up or equip 2 Gauntlets of the same element.

They can however instantly swap out the Gauntlet in their left hand by hitting the default keys 1, 2, 3, or 4 with a Gauntlet equipped in the corresponding inventory slot.

Gauntlets along with other equipment can be found throughout the Hollow Lands, but higher rarity versions are only found in

Chests, with Legendary versions being limited to

The rarity of a Gauntlet only influences the effectiveness of its Spell. The Sorcery remains the same.

Players start out with a base max mana of 50, which will limit the amount of Spells they can cast in quick succession. They also cannot cast Spells while levitating.

Once a player has depleted all their mana, they are locked out from casting Spells until they fully recharge it over 1 second.

However, they're free to perform actions which don't require mana without recharging first, such as casting Sorceries and Runes.

Each Gauntlet's main Spell has a different cast time and fire rate.

The fire rate determines how quickly they can cast another spell or start mana recharging after firing.

Lightning Gauntlet also has an additional mana recharging delay, due to its unusually rapid fire rate.

Aiming a Sorcery while airborne will cause a player to hover. May be cancelled by a spellcast input at any time.

Fireball & Boulderfall explosions deal 50% & 25% friendly fire damage respectively to both the caster and their teammates.

Due to how the game calculates the trajectory of projectiles with respect to the crosshair, there is a special rule in place for very fast projectiles:

For targets closer than 10 meters, the Ice Lance and Lightning Bolt projectiles will only hit a target if the player's crosshair was directly over their hitbox upon firing.

This means that if the crosshair wasn't directly on them, the projectiles will always miss or go through the target. For distances above 10 meters, the rule doesn't apply.

The following table lists all elemental interactions between Spells & Sorceries. Hover over keywords to read their effects.

All the elemental interactions listed are universal. This means that anyone can affect and interact with the elements the same regardless of who they originated from.